Why Go to College?

Just what, exactly, is college for? Researchers asked a representative sample of the U.S. adult population about the purpose of college. From a list of options, respondents could select as many as they believed apply. Americans overwhelmingly see higher education as a path to gainful employment and financial security. It’s a view shared across religious demographics: by Christians, by adherents to non-Christian faiths and by those who profess no faith at all. In some cases, Christians most fervent about their faith—including practicing Christians and evangelicals—are even more pragmatic and career-focused than non-Christians. Moral and spiritual development are seen as important but not the best reason to pursue a college education.

Seven in 10 adults 18 and older believe the primary purpose of a college education is to “prepare for a specific job or career,” and just over half say it is to “increase financial opportunities.” About half think it’s to “stay competitive in today’s job market.”

Now compare the top choices with the bottom three options: “learn how to make a difference in the world,” “develop moral character” and “encourage spiritual growth.” In the prevailing views of Americans today, ethical, moral and spiritual goals get much shorter shrift than career objectives when it comes to college.

Falling somewhere between job-focused highs and spiritual lows are personal growth and practical skills: “strengthen critical thinking and writing skills,” “grow in leadership skills,” “discover who you are” and “learn about academic interests.” These mid-list items could be understood as the “soft skills” that support a career-driven focus or as personal goals oriented toward self-improvement.

After seeing the general population data, one might expect Christians to have a different set of priorities—but that’s not the case. In fact, self-identified Christians are just as likely, and in some cases more likely, to hold the “college-is-about-career” perspective. 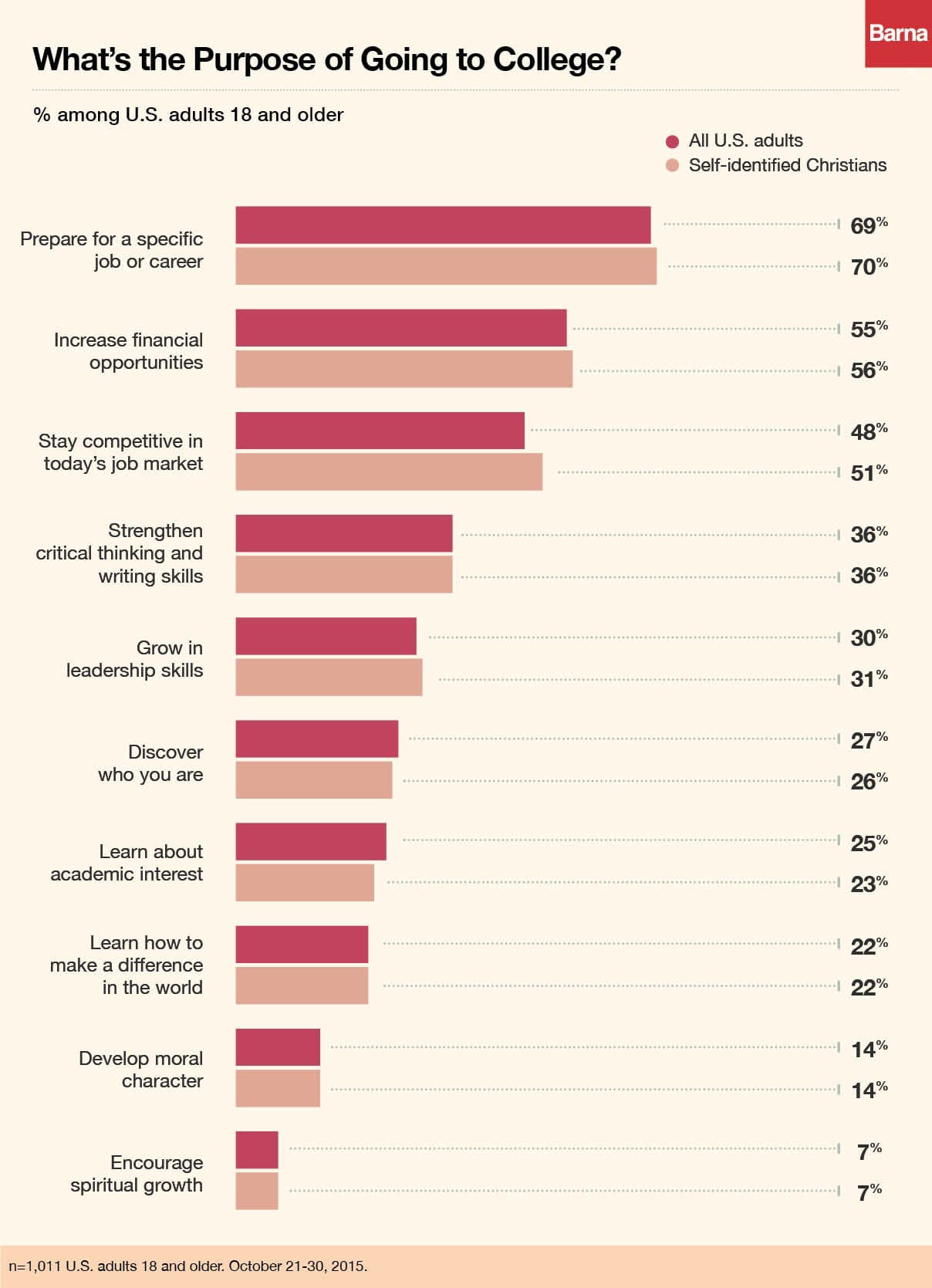 Percentages are virtually identical between U.S. adults overall and self-identified Christians. Christians agree with the general population that college is primarily about preparing for a specific job or career, increasing financial opportunities and staying competitive in today’s job market. Perhaps the most unsettling finding, however, is Christians’ overall disassociation of higher education with spiritual and moral development. In lockstep with all U.S. adults, only 7 percent of self-identified Christians say college is for encouraging spiritual growth, and just 14 percent say it’s for developing moral character. Unexpectedly, those with no faith—a category that includes atheists, agnostics and “nones”—are statistically tied with self-identified Christians in saying that spiritual growth is the purpose of college.

Differences between the general population and evangelicals are also less significant than might be expected. The two most notable differences are “increase financial opportunities” (69% evangelicals vs. 55% all adults) and “learn how to make a difference in the world” (32% vs. 22%). Analysts were most surprised that evangelicals express a strong preference for greater financial opportunities—especially compared to those with no faith (49%)—given their generally high biblical literacy and the Bible’s warnings about seeking after wealth. It would be difficult to overstate the noteworthiness of these findings. While other factors—theological beliefs, church attendance, frequency of Bible reading, perspectives on sexuality and marriage and so on—consistently distinguish evangelicals from the general population, the differences when it comes to the purpose of college are negligible, nonexistent or counterintuitive.

Those invested in biblical higher education should pay close attention, because student recruitment efforts must take into account the college-to-career assumption—not necessarily to share or capitulate to the assumption, but certainly to bear it in mind as a factor that strongly influences prospective students’ college choice.

Published by: The Barna Group